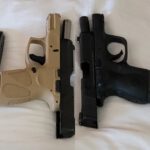 On Monday November 8, 2021, Berwick Police Department responded to several calls of vehicle burglaries in neighborhoods located in the Berwick area. During the course of the investigation, it was determined that Morgan City Police were also working similar reports and both agencies were able to begin a joint investigation.

Berwick residents were able to provide video surveillance of a suspect vehicle and suspects to further the investigation.  On Tuesday November 9, 2021 Morgan City Police located the suspect vehicle at a local hotel which led to a search warrant being obtained by Morgan City Police for a hotel room.  Berwick Police investigators assisted with the search warrant in which 10 handguns were located that had been reported stolen. Two of which were learned to be from burglaries in the Berwick area.  The handguns were recovered by Morgan City Police and placed into evidence.