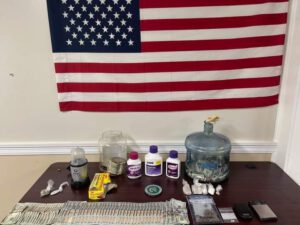 The Houma Police Department announces the arrest of Roland Robinson-41 yrs. old and Kizzy Rice 44 yrs. old of Grand Calliou Rd for charges relative to narcotics possession and distribution of heroin and marijuana.

For the past several months, the Houma Police Department’s Narcotics Division conducted investigation into illegal narcotics sales from a residence within the 400 block of Grand Calliou Rd. During the investigation, HPD agents identified Roland Robinson as the suspect. As the investigation continued, Houma Police Narcotics agents made numerous purchases of heroin from Roland Robinson, which led to warrants through the 32nd Judicial District Courts being obtained for Distribution of Heroin, Possession with the Intent to Distribute Heroin, Violation of a Controlled Dangerous Substance in a Drug Free Zone and Transaction Involving Drug Proceeds.

On 4-26-22, as HPD Narcotics conducted surveillance at Robinson’s residence on Grand Calliou Rd, he was seen departing the area in a vehicle. At this point a traffic stop was conducted where he, along with an occupant identified as Gary Robinson Jr-39 yrs. old of Highway 15 in Rayville, La, was taken into custody. Warrants on Roland Robinson were executed, but a search of the vehicle occupied by both Roland Robinson and Gary Robinson Jr. had over 11 grams of heroin. Houma Police had warrants on Gary Robinson Jr for narcotics violations and he was taken into custody as well.

While on the traffic stop, HPD narcotics agents, assisted by Louisiana State Police Criminal Investigative Division and the Terrebonne Parish Sheriff’s Office Criminal Intelligence Unit conducted a search of Roland Robinson’s residence and located over 6 ounces of additional heroin, over 6 grams of marijuana, various paraphernalia to include digital scales. Agents also arrested Kizzy Rice who was at the residence when the search was conducted, and the narcotics and paraphernalia was located. She was taken into custody and arrested for Possession with Intent to Distribute Heroin, possession of Marijuana and Violation of a Controlled Dangerous Substance in a Drug Free Zone.

Both Roland Robinson and Kizzy Rice were transported to the Terrebonne Parish Criminal Justice Complex to be booked on the aforementioned charges. Unfortunately, Gary Robinson Jr had to be transported to a medical facility for treatment and additional warrants will be obtained through the 32nd JDC relative to the narcotics located in the vehicle during the traffic stop.

Anyone with information is encouraged to submit a tip anonymously through Crime Stoppers Bayou Region by phone at 1-800-743-7433 or online at www.crimestoppersbr.org.
Tipsters could be eligible for a reward of up to $3,000 in cash if the information leads to an arrest.