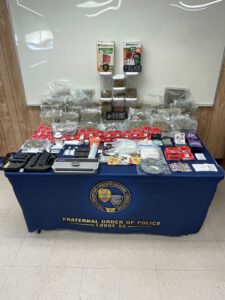 Thibodaux Chief of Police Bryan Zeringue announced that an arrest was made in connection with a traffic stop that led to multiple narcotics search warrants.

The search of the properties resulted in the seizure of suspected methamphetamine, additional suspected cocaine and marijuana, as well as packaging equipment and multiple assets.

Chief Zeringue would like to thank the Louisiana State Police Criminal Investigations Houma Division for their assistance with the investigation.