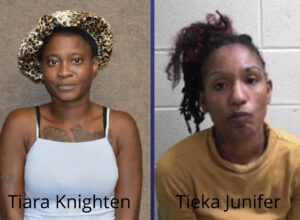 On August 30, 2022, just prior to 3:00 p.m., officers with the Morgan City Police Department responded to the area of Egle Street in Shannon Homes regarding shots being fired in the area. Local schools in the area were locked down as a safety precaution until the area was deemed safe. Officers arrived and learned that one of the parties involved had left the area.

According to reports, Tiara Knighten and Tieka Junifer, both of Morgan City, were identified as being involved in a physical altercation. During the altercation, a firearm was allegedly produced by Knighten when the duo began to struggle over the weapon. The firearm discharged and the parties dispersed. No one was struck by gun fire. The firearm was located and was found to be reported stolen. Warrants were obtained for the arrests of Knighten and Junifer on their involvement in the incident.