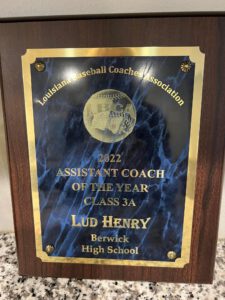 In a Facebook post, Berwick High School said, “This award and more are a testimony to Coach Lud Henry because of his commitment to Berwick High. Coach Henry’s dedication spans a number of years; first as a student, then returning home as a teacher and coach, both assistant and head coach previously, then as a principal, and after retiring, returning as substitute teacher and assistant coach! We are proud of you, Coach Lud Henry!”