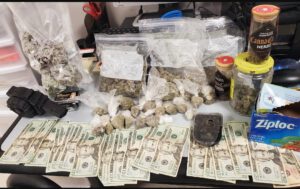 Lafourche Parish Sheriff Craig Webre and Lafourche Parish Schools Superintendent Jarod Martin announced a Thibodaux High School student has been arrested after more than one pound of suspected marijuana was found in his vehicle parked at the school. Andrew Nora, 18, of Thibodaux was arrested on Monday.

On March 28, 2022, K-9 units from the Lafourche Parish Sheriff’s Office and Thibodaux Police Department arrived at Thibodaux High School to conduct a routine search of the parking areas around the school. During the search, a K-9 alerted to the possible presence of narcotics inside a vehicle, the driver of which was identified as Nora. Nora unlocked his vehicle for school administrators who located a backpack containing a large amount of suspected marijuana. Deputies took over the investigation and located an additional backpack containing more suspected marijuana as well as other items commonly associated with the sale of illegal narcotics. In all, Nora was found to be in possession of 524.7 grams of suspected marijuana, or just over 1.15 pounds. He was also found with $350 in cash and ammunition for a 9mm firearm, including a drum-style magazine.

Nora was arrested and booked into the Lafourche Parish Correctional Complex in Thibodaux. He was charged with Possession with Intent to Distribute Marijuana, Possession of Drug Paraphernalia, and violation of a drug-free zone. He was released on Monday afternoon after posting bail in the amount of $6,100.

Superintendent Martin said, “The Lafourche Parish School Districts’ partnership with our local law enforcement allows us to identify and remove anyone that violates the law while on campus. We will continue to actively investigate and discipline anyone found to be in violation of the law or our standards of conduct. We are committed to ensuring that our schools always remain places where all students feel safe and welcome.”