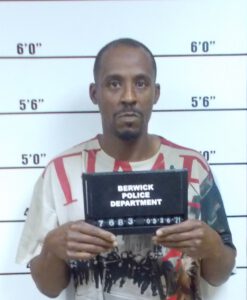 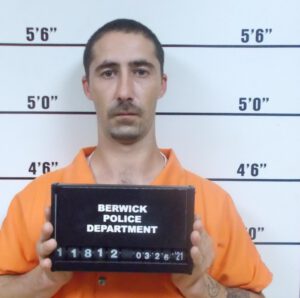 On Friday March 26, 2021 Officers with the Berwick Police Dept. located Durapau at the St. Mary Parish Law Enforcement Center and transported him back to Berwick Jail to be booked on warrants that were held for his arrest through Berwick Police Dept. The warrants stem from an incident that occurred on March 16, 2021 at a residence on Parro Lane in Berwick in which Durapau entered a residence unauthorized and later  tried forcing a female to leave with him in his vehicle. Durapau was developed as a suspect, however he could not be located that night. Warrants were prepared for his arrest and he was arrested by the St. Mary Parish Sheriff’s Office on March 15th  at a Hotel in Franklin.

Illegal Use Of CDS in Presence Of Minor

On Friday March 26, 2021 at approx. 8:53 pm Officers with the Berwick Police Dept. conducted a traffic stop on a vehicle on U.S. Hwy 90 for speeding 70 mph in a 50 mph speed zone. The driver was identified as Bergeron and he was found to be driving with a suspended drivers license. During the course of the stop, an odor of Marijuana was detected in the vehicle and a search was conducted. Marijuana and items of drug paraphernalia were located. There was in a minor as a passenger in the vehicle at the time of the traffic stop which resulted in the additional charge of Illegal use of a CDS in presence of a minor.  It was also learned that Bergeron had an outstanding warrant through 27th JDC for the Failure to Appear. 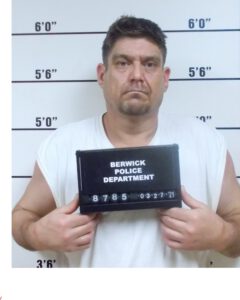 2 counts of Possession of Xanax

Officers with the Berwick Police Department were dispatch to a welfare complaint at 1983 River Rd lot 5 in Berwick.  Officers learned from neighbors while on scene that  a disturbance had occurred the night prior in the early morning hours and a female may have been injured. While on scene, officers observed clothing and other items scattered through the carport and yard area. It was determined at this point that there was some type of disturbance that had taken place. After making several attempts to make contact with someone inside the home, a search warrant was secured for the residence.  Berwick Officers, with the assistance of the St. Mary Parish Sheriff's Office, executed the warrant and located Taylor along with a female inside the residence. Officers learned the female had been battered and strangled during the incident. Upon making contact with Taylor, he was found to be in possession of suspected Methamphetamines, two types of Xanax, Clonazepam, and Oxycodone. Officers located more suspected meth and paraphernalia inside the residence. Taylor was booked into Berwick Jail with no bond set. The investigation is ongoing.

The female victim was transported to a local facility for medical evaluation.

On Sunday March 28, 2021 at approx. 9:57pm officers were dispatched to a residence on the 2000 block of River Road in reference to a call of a male and female fighting at that location.  There was obvious signs of a disturbance and the suspects were identified as Dex and Misty Clements. During the course of the investigation, it was learned that there were batteries committed by both therefore both were placed under arrest.  Both were transported to the Berwick Police Dept. where they were both booked on the charges waiting on bond to be set.