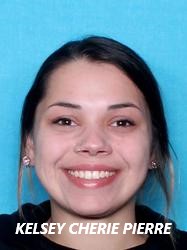 On September 16, 2022, shortly after 2:00 pm, the Terrebonne Parish Sheriff’s Office Patrol Division was called to a private residence on Shamrock Drive, where they initially learned of the missing person. Deputies made contact with the family of Kelsey Cherie Pierre, who reported that she was last seen walking in the area of Bayou Blue, on Sunday, August 14, 2022. Deputies learned through investigation, that Pierre has allegedly been seen in the areas of Dulac and Grand Caillou Road, within the last 2 weeks. One report claimed that Pierre was seen with an unknown black male, possibly driving a Ford Crown Victoria vehicle, white in color.

At this point in the investigation, authorities have been unable to locate Kelsey Cherie Pierre, or the vehicle in question. Pierre has been placed into the National Crime Information Center (NCIC) as a missing person.

Sheriff Soignet encourages anyone with information or knowledge of her whereabouts to call the Terrebonne Parish Sheriff’s Office at (985) 876-2500 or simply dial 911.