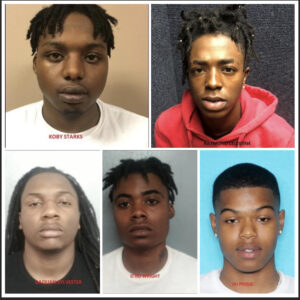 Members of T.P.S.O. continued investigating this shooting incident. Information gathered through witnesses and physical evidence led to the arrest of several individuals. The investigation revealed that several suspects, who were in multiple different vehicles, arrived at this location within minutes. A disturbance ensued between these subjects. During this disturbance 19-year-old Jai Poole produced a handgun and shot 21-year-old Mcgarrete Jackson. Jackson was later pronounced deceased.
There were other individuals that produced firearms as well and fired shots. No one was struck by the gunfire of the other suspects. There was damage caused to vehicles of uninvolved individuals from these gun shots.
Several of these suspects have been located and arrested for assorted offences. Jai Poole was arrested for Second Degree Murder. Information indicated that 19 -year-old D’nd Wright discharged a firearm during this incident. He was arrested for Illegal carrying of a concealed firearm, Illegal Discharge Of A Firearm, and Aggravated Criminal Damage To Property. 18-year-old Raymond Celestine, 19-year-old Daquan Sylvestor, and 20-year-old Koby Starks were all three arrested for Obstruction Of Justice In A Homicide Investigation. This is due to their participation in removing evidence from the scene prior to investigators arriving.
Terrebonne Parish Sheriff’s Office is attempting to identify and locate additional suspects. Anyone with information is asked to contact the Terrebonne Parish Sheriff’s Office at (985)876-2500 or the Bayou Region Crime stoppers at (800)743-7433 as you may be eligible for a cash reward.
Terrebonne Parish Sheriff’s Office would like to think Houma City Police Department and Louisiana State Police for their assistance.

It is reported that shortly after 3:00pm on Sunday 7-19-2020, Terrebonne Parish Sheriff’s Office received multiple calls of a shooting at the business in which one person was injured. Through the investigation, it was learned that a disturbance occurred that resulted in multiple people drawing firearms and shooting at each other. During the shooting, multiple bystander’s vehicles were damaged.

On scene, Mcgarrete Jackson (21 years of age) was located suffering from multiple gunshot wounds. He was transported to a local hospital where he was pronounced deceased. Houma Police Department assisted in the investigation.