Cashwick Clark, a 31 year old black male, was arrested Thursday at approximately 5:00 pm. He was booked on 8 counts of Attempted 1st Degree Murder, Aggravated Criminal Damage to Property, Illegal Use of Weapons, Violation of a Firearm-Free Zone, Possession of Firearm by a Convicted Felon, and other municipal warrants.

Earlier on Thursday, at approximately, 2:45 pm, Aris Granger, also a 33 year old black male, was booked on the charges of 8 counts of Attempted 1st Degree Murder, Aggravated Criminal Damage to Property, Illegal Use of Weapons and Violation of a Firearm-Free Zone.

Later Thursday evening, officers with Berwick Police Department with assistance of the Morgan City Police Department executed a search warrant for a third suspect at a mobile home on Versen Street in Berwick. That’s when officers say the suspect fled into an area behind the mobile home park. After about a one hour standoff, the suspect, Gerald Sylvester, a 30 year old black male, was taken into custody. Sylvester was booked on the charges of Attempted 1st Degree Murder, Possession of a Firearm by a Convicted Felon, Illegal Use of Weapons, and Illegal Carrying of Weapons in a Drug -Free Zone. Multiple agencies from throughout St. Mary Parish assisted at the scene. 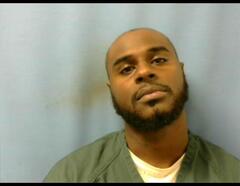 The Morgan City Police Department was dispatched to the area near Lawrence Park on Wednesday evening to investigate a report of shots being fired. A spokesman with the police department said there was an apparent disturbance between some subjects that resulted in shots reportedly being fired at approximately 7:00 pm.

Several eyewitnesses told KQKI News at the scene that there were several females walking along Third Street near the park when a male walked or ran up to the group and began arguing with one of the females. That’s when he allegedly shot at the female’s head, but missed. Witnesses said the alleged shooter also narrowly missed a young child who was standing in the area of the disturbance.

Clark, Granger and Sylvester were later identified as suspects in the shooting. Officers say the charges stem from the number of people in the area, along with the park being located in a firearm free zone.