According to the Chitimacha Police Department’s Facebook page,the Chitimacha Tribal Police are saddened to announce the passing of K-9 “Rex”.

Rex was a 6 year old Belgian Malinois that originally trained and served as an explosive detection K-9 in the Netherlands Military. Approximately 3 years ago, he was donated through an anonymous donation that was facilitated by Paul LeBlanc at La K-9 in Maurice, Louisiana.

Rex was certified by La. K-9, as with his handler Sgt. Nick Picard in the detection of numerous explosives, as well as tracking and article searching. During his career at Chitimacha Police Department, K9 Rex was utilized at many businesses, schools’ and public places for the detection of explosives. Rex was used for special events like events in Lafayette for large conferences at the Cajun Dome and he and Sgt. Picard were used by the NFL for the past two years at all of the Saints home games. K-9 Rex was utilized in the tracking of elderly and special needs individuals. K-9 Rex was a gentle K-9 whose passive nature was in perfect concert with an unwavering drive that made him very successful at being able to track those who are most vulnerable.

Lastly, Chitimacha Tribal Police would like to thank Agee’s Pet Crematorium in Harvey Louisiana for their assistance with the upcoming memorial.

The Chitimacha Police Department will have a memorial for K9 Rex in the near future. Once that is arranged, notification will be sent out. 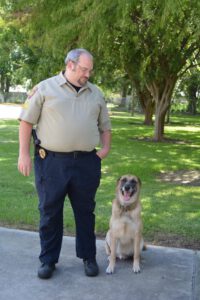 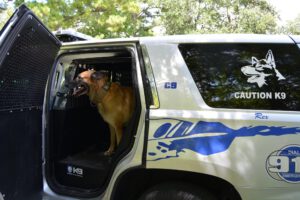