As per Chief Hal Hutchinson:

On 10-18-20, officers with the Chitimacha Tribal Police Department were conducting routine patrols when a suspicious vehicle was observed. Sitting inside the vehicle was the driver and a front-seat passenger. As officers approached the vehicle, it appeared the driver had a loaded firearm in his lap, along with methamphetamine and cocaine.
Once the handgun was secured, the occupants were taken into custody. Further investigation revealed the car, a 2016 Porche Caymen S, was stolen from Lafayette.

The passenger was identified as Crystal Renee Rubin, 36-years-old, Belgium, Lafayette. She was charged with possession of schedule II (Methamphetamine), possession of drug paraphernalia, possession of a firearm by a convicted felon and felony warrants from Acadia Parish for theft of a debit card and identity theft.

Once both were processed at the Chitimacha Tribal Police Department, they were booked into the St. Mary Parish Jail for the above-listed charges. 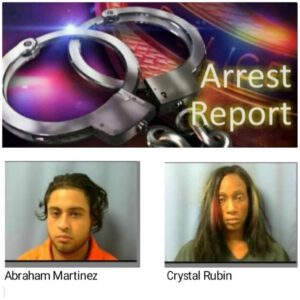